Winner of the Embedded Systems category in the ESME Speed competition, the LiFyre project is designed especially for firefighters, to help them improve their own working conditions. A team of fifth-year students (ESME Sudria class of 2019) designed this innovative and useful project–Mohamed Bourguiba, Hasna Doghri and Camille Gendreau. We recently talked to these students about their project.

What’s the concept behind LiFyre?

Camille: LiFyre is an electronic body monitoring system for firefighters. It’s a device that firefighters wear when they’re working at a fire. The device gathers multiple types of data about the firefighter and the environment.

What type of data?

How did you come up with the idea for LiFyre?

Hasna: When the firefighters are out on a call right now, they have no way to communicate with their chief outside the building that’s on fire. So they have no way to talk to each other if there’s a problem! That reality gave us the idea for LiFyre, so that they could let their chief know if there was some sort of health issue or if someone fell, and they could also do a better analysis of the situation from outside the building.

What did you enjoy about working on this project?

Camille: Yes! No one had ever done a project like this in the past, and it’s also a project that affects all of us: the firefighters are here for us every day, and working on LiFyre gave us a chance to help them. It’s really a useful project!

Hasna: I agree. We didn’t just want to do a final project; we wanted to create something that had a real-world application that could help people. 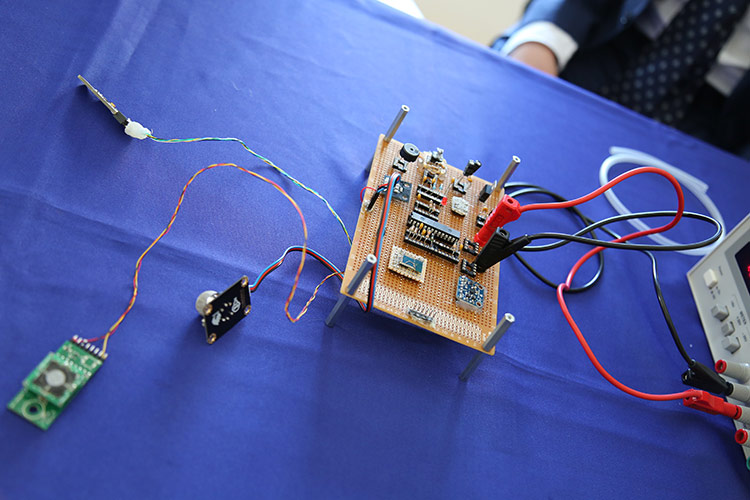 Did you work together with any firefighters while you were developing the project?

Mohamed: Our project advisor, Philippe Debadier, is a volunteer firefighter alongside his work as the coordinator for the Embedded systems major at ESME Sudria. He was the one who suggested that we focus on this topic, and he had Camille and Hasna come on a tour of the firehouse in Argenteuil where he works.

Camille: We were able to see the fire trucks and their equipment, and we also got to test out their firefighting suits to see if they could wear our device or not. We were also able to talk to the firefighters and see if they would find this device useful or not.

What’s the current status of the project?

Hasna: We have a working prototype, and we’ve also started developing an app with a database where they can enter the fire chief’s name, and the names, ages, and training levels of the working firefighters.  We’re also planning another interface that would allow the chief to send a specific firefighter to a specific location, so that they can closely track each person.

Will you continue with that?

Camille: That’s the plan, yes. Future fifth year students will keep working on the development, and we’re sure that they’ll take it to the manufacturing stage, while adding new functions, like the option to have voice communication between the chief and the firefighters.

What was your biggest challenge during the LiFyre project?

Hasna: For me, it was having to comply with very specific specifications. Specifically, we had to use components that were extremely heat-resistant, up to the temperatures that the firefighters might have to deal with in real life. We also had to put together a large amount of components in only five months.

Camille: Also, the components use different technologies. In a short amount of time, we had to learn these technologies, and none of us were familiar with them. Finally, LiFyre also allowed us to work on different things–hardware when we created the electronic card, and the software to run it. That meant that we had to work across a number of disciplines, but that’s what ESME Sudria taught us to do!

Privately Endowed Graduate Educational Institution – Education Authority of Créteil Registration – This school is a member of IONIS Education Group such as :