Biomimicry Day: When ESME Sudria Lille looks to the natural world for innovations!

2019 marks the 500th anniversary of the death of Leonardo da Vinci. Da Vinci–a timeless genius and polymath–is regularly cited as the first person to develop theories about biomimicry. Biomimicry means studying nature, taking inspiration from living systems, and attempting to replicate all or part of them for purposes of innovation. ESME Sudria and the ISG joined forces to focus on the topic of biomimicry during a day-long event including lectures and workshops, on Wednesday, November 13. The event title: Biomimicry Day: Responsible Innovation. 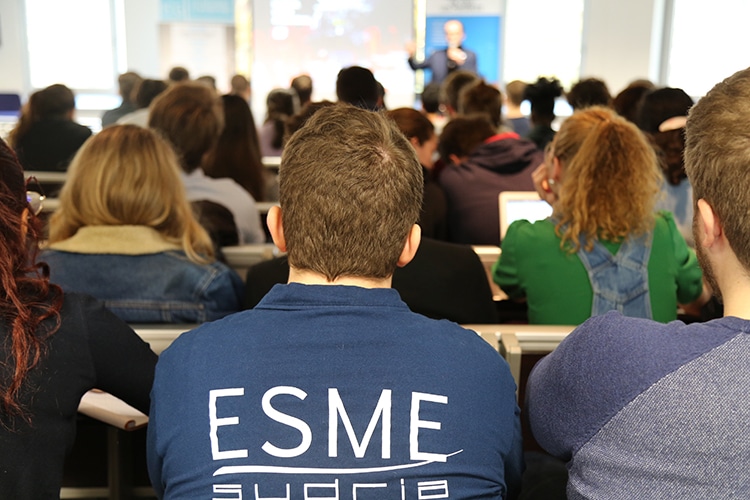 Working professionals, people curious about the topic, and university students gathered at 60 Boulevard de la Liberté to network, learn about the natural world, and uncover new and promising solutions.  “In light of today’s climate challenges, ESME Sudria has positioned itself as a school that can innovate in ways that respect biodiversity and are cost-efficient–these are real challenges that will be omnipresent in the business environment in the future,” says Johan Verstraete, director of the Lille campus. “Throughout our history, ESME Sudria has always sought to train cutting-edge engineers. For that reason, we want our future graduates to understand these new challenges. Biomimicry Day is part of this effort to deepen our students’ knowledge, so that later on, they can logically and easily look to the natural world when they’re designing new projects.” »

Our engineering students looking to deepen their knowledge were treated to the presence of two representatives from Ceebios, the European Centre of Excellence in Biomimicry at Senlis. Hugo Bachellier is the director of training and regional strategy, and Bertrand Monfort is the Ceebios representative for southern France. Hugo Bachellier took the opportunity to give an overview of Ceebios’ activity (“a biomimicry skills network in France, which seeks to support society’s transitions through innovative approaches inspired by the natural world”) along with the “Nature=Future” video series. He also emphasized the natural world’s potential; it can “create, store, and process data,” and the need to create more “low tech” projects–technologies that are useful, accessible, and durable.

“Every species is a book”

Hugo Bachellier told the group that biomimicry and bio-inspiration can give rise to complex systems that give simple results, or simple systems that solve complex problems–an example is permaculture. “I’m an engineer by training, and I became interested in biomimicry after a lecture by the American scientist Janine Benyus, who’s known for having formalized the concept.  That motivated me to found an association–now known as Chrysalide–at my university. Then I went to work for Ceebios. A day like the ISG/ESME Sudria Biomimicry Day is a fantastic initiative, because you feel that these schools really want to get involved in biomimicry. As a speaker, I wanted to offer a framework and not make the discussion too focused on technology, to show how biomimicry could allow everyone to reconnect to the challenges of the biosphere.”

Bertrand Monfort focused his talk on nature’s infinite richness, reminding the attendees that the nature-based engineering approach looks at three levels when solving problems: form (design), materials (process) and ecosystem (relationships). He also cited a number of examples of living things that are able to do things that are almost unbelievable, like “spiders spinning webs that are almost as strong as steel,” or “the Virginia creeper vine that has tentacles that can stick very tightly to walls,” or even “mussels that secrete a byssus, an extraordinary type of glue that works in water and in air.” Monfort, a true specialist, thinks it’s time to open our eyes and think differently about the future: “Every species is a book, and biodiversity is a library.  But humans generally know very little about the richness of information in the natural world. That means we have to rethink everything!” »

That’s the opinion of Alain Renaudin, president of the consulting firm NewCorp and founder of the Biomim’Explo, a major annual event focused on biomimicry.  “We’re disconnected from the natural world, specifically because of increased urbanization, and we’ve lost a certain amount of good judgment. We’ve forgotten about nature’s resiliency, and its ability to teach us. Biomimicry is an invitation to re-learn things. And when we learn, we love it, and we’re amazed at the natural world all over again! We, homo sapiens, the newcomers to the planet, have to learn from the medusa, from the sharks, from plants…organisms that are much older than we are, and that have sometimes survived multiple mass extinctions. Nature means 3.8 billion years of R&D.. What’s new isn’t biomimicry, but the context.  Biomimicry takes us from learning why we need to change, to learning how we need to change. People won’t save the planet, the planet will save people. So we have to reconsider the natural world, to help ourselves do better. This is a 180° change of perspective, and if that speeds up, it’s going to give us new tools to observe and imitate the natural world.” »

This concept of urgent action through a new way of returning to nature also appeared in a lecture given by Stephan Hoornaert, a biomimicry consultant at Morpho-Biomimicry. “The “sapiens” in “homo sapiens” means “wise, but are we really wise?” Hoornaert asked the audience this question, alerting them to the danger of our present situation. “We’ve set some new records. We’re at the beginning of the sixth massive extinction, 60-70% of insects have disappeared in a few years, and the landscape is changing; we’ll soon be at the point of no return. Are we going to just keep waiting?” »

Citing Leonardo da Vinci, “Learn your lessons in nature, that is where our future lies,” Stephan Hoornaert called for widespread and profound change in our way of thinking about the world. “We solve our problems through technology, and to do that, we’re going to primarily use energy and matter. Nature does things differently: she draws on information and structure.” In order for biomimicry to be a real solution, we need to never forget its three pillars: ethics, reconnection, and ethos. “Without ethics, this is just greenwashing.  Connections are also essential: we’re animals that have been disconnected from nature and from what’s happening inside us. We have to change that and learn how to listen.  Finally, we also have to stop hyper-specializing, segmenting, working in “castes” that are insensitive and unaware. We’ve forgotten how to collaborate. Engineers and biologists are wired differently, but they have to talk to each other, learn from each other, and exchange visions.” »

Businesses are already getting involved

Other speakers were representatives from businesses that have already committed to biomimicry, like Blue Lingua (bio-inspired radar), Decathlon (a towel inspired by the thorny devil lizard for shorter drying times, a basketball that repairs its own leaks by filling punctures with an internal gel), and Eel Energy. Since it was founded in 2012, Eel Energy has been developing an undulating-wave marine turbine that imitates the swimming motion of a fish, so that wave energy is captured in linear generators. “Our company is based in Boulogne-sur-Mer, so we focus as much as possible on contacts within our own region,” says CEO Franck Sylvain.  “It seemed especially appealing to us to come meet with students. The students at this event asked many questions, and that was great, because it’s important to be curious. This curiosity motivates them to look at what’s being done elsewhere, to produce better designs yourself. In the end, that’s the essence of biomimicry.”

There were other professional experts in the workshop area, who presented their innovations or activities. One was Erik Guillemin, president of the startup AMS R&D that developed the undulating membrane technology known as Wavera, which can be adapted to all types of pumps. “Whenever we meet with engineering students, we like to show them our innovative technology and what it enables us to do. For us, this is a springboard into the future. In a certain way, we’re planting a seed: some of them will be struck by our technology and will remember it, and others will take inspiration from our approach and apply it to other areas. Something positive and interesting will always come out of it!” What could be better than inspiring a student, like Louis Trousson (ESME Sudria class of 2022), a member of Biomimtech, the school’s new student association–as its name would suggest, the group focuses entirely on biomimicry: “A day like today, with many speakers who we can see and talk to, allows us to absorb even more information about this approach.  It allows us form new relationships and grow our association! “