At the beginning of 2020, ESME Sudria Paris’ first year Engineering Cycle students spent a full week focusing on engineering for sustainable development, as part of the first annual Innovation Week. This event–held on the ESME Sudria campus from Monday, February 3 – Friday, February 7–used a model similar to a hackathon, in which teams of students solved a specific problem that they had never seen before. This was a joint initiative between ESME Sudria and Engie Solutions, our partner for this edition of the program. Students in the class of 2022 focused on six topics: Carbon Footprint-Employee Interface, Carbon Footprint-Project Interface, RATP (Paris public transportation network) Client Needs, Renewable Energy, Mobility, and Information Technology Usage. 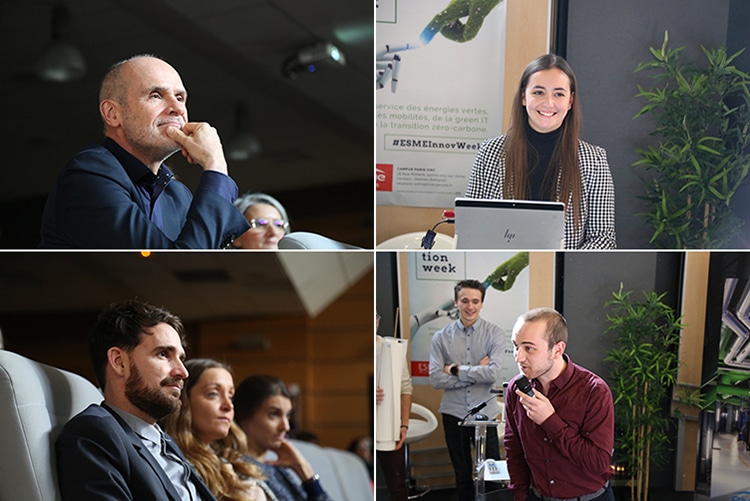 Our students are motivated…

“We’re always surprised to win a prize!”  Samantha Goncalves is sporting a big smile, and for good reason: along with her team members Alexandre Bouygues, Caroline Michel de Chabannes, Valentin Jolly and Antoine Parayre, she  won the Innovation Week 2020 trophy based on the jury vote. Samantha’s team first made the finals in their category, before winning the final stage after their pitch, presenting Ec(H)o+, a project to “Allow Engie Solutions to get its employees on board with the transition to zero carbon emissions,” using “a collaborative app giving all of the company’s employees the chance to share their suggestions on various topics: mobility, communication, and external activities.” It’s a cutting-edge topic that really appealed to the professionals in the group, as well as the students. Antoine Parayre told us, “When the topic was announced, we weren’t immediately in love with it.  But the more we researched it, the more we got caught up in it, and in the end we were 100% in. As the week went on, we got more and more involved and really gave it our all.” The team’s commitment was rewarded with a trophy, medals, and “VIP box seats at the French Open and a tour of Engie’s site. It was a great day!” 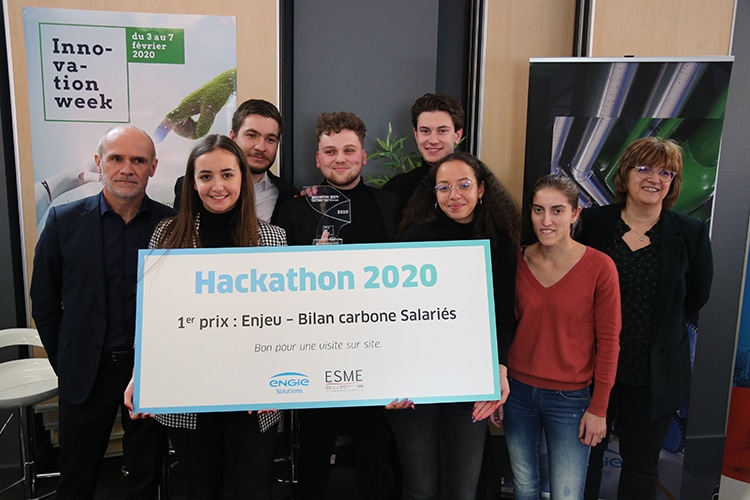 Florian Brunet was also very happy with this very energizing week. “I thought it was very cool,” he tells us. The thing I really enjoyed was meeting so many experts and engineers, and having access to so much data, sometimes even too much data! We had to sort through all of it throughout the week during this very long hackathon. A typical hackathon lasts 48 hours, and ours was five full days!” Along with his friends Camille Guillot, Killian Serbie, and Thibault Walker, Florian won the audience prize for “Eole,” a project focused on renewable energy. “Our goal was to increase the amount of renewable energy in office buildings. To do that, we envisioned building a wind turbine on top of an office tower. At the outset, when we looked at the project, we thought it wasn’t very realistic. But when we dug a little deeper, we saw that it was doable. That motivated us to take it to the limit!”

On the Engie Solutions side, there was just as much enthusiasm at the end of this creative marathon. Cindy Figueiredo, business manager at Engie Ineo, was on hand to support and advise the students on the topic of “Carbon Footprint-Employee Interface.” She had a tough time choosing from among the finalists! “I thought that the students were all very constructive, and they worked well together. When the time came to pick the project for the final phase of the challenge, we were torn between two projects, and in the end we chose the one that had the best prototype: Ec(H)o +.” This choice seems to have paid off, although–in addition to the prizes that were given out–the ripple effect of this one-of-a-kind hackathon goes beyond medals and trophies. Yann Rolland, director of the business unit at Engie Solutions and CEO of Engie Ineo, told us, “This first-of-its-kind collaboration between Engie Solutions and ESME Sudria embodies our desire to create a partnership between a multi-disciplinary engineering school and our company. Because we’re a large business, we’re always in need of dynamic energy and new ideas to help us in the transition to zero carbon emissions; that’s the focus of our plans and our strategy. So this hackathon was a chance to learn about innovative ideas from a new generation with a focus on our planet.

Yann Rolland was captivated by many of the ideas that the students presented, including Er@sor, an enterprise-level e-mail deletion tool, designed by Valentin Chevaillier, Elodie Edouard, Chloé Lhermitte, Hector Salathé, Louise Salaün and Pierre Wils.  Er@sor is a significant project, given the scale of annoying e-mails that employees receive. “The finalist projects were all very interesting and creative.  It wasn’t easy to vote for just one of them, especially because these ideas were very concrete, and potentially easy to bring to life. Personally, I voted for the Er@sor project, and although it didn’t win, I asked the Engie IT teams to see how we might be able to deploy this idea at our company.” That was Yann Rolland’s way of emphasizing his company’s confidence in ESME Sudria’s engineering students. “I was expecting some good things, and I wasn’t disappointed. I’m really convinced that we always generate more ideas together than alone, and that we find new ideas everywhere, including by soliciting input from young people, not only working professionals. Because we’re wrapped up in the issues, sometimes we don’t see the bigger picture. The students’ responses were very helpful!” 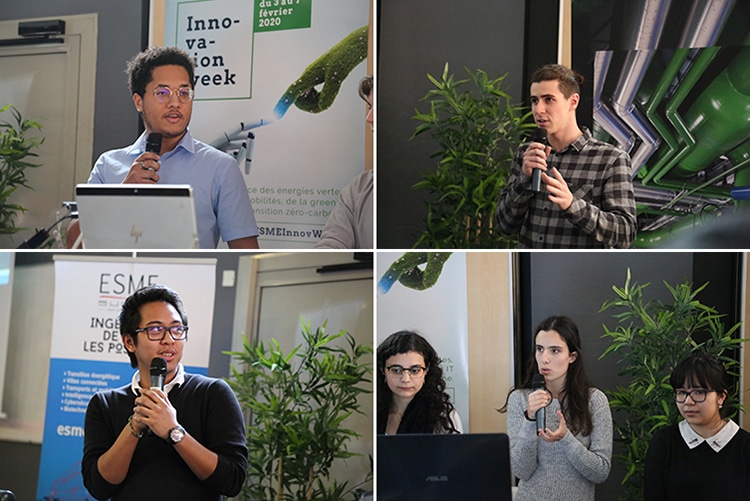 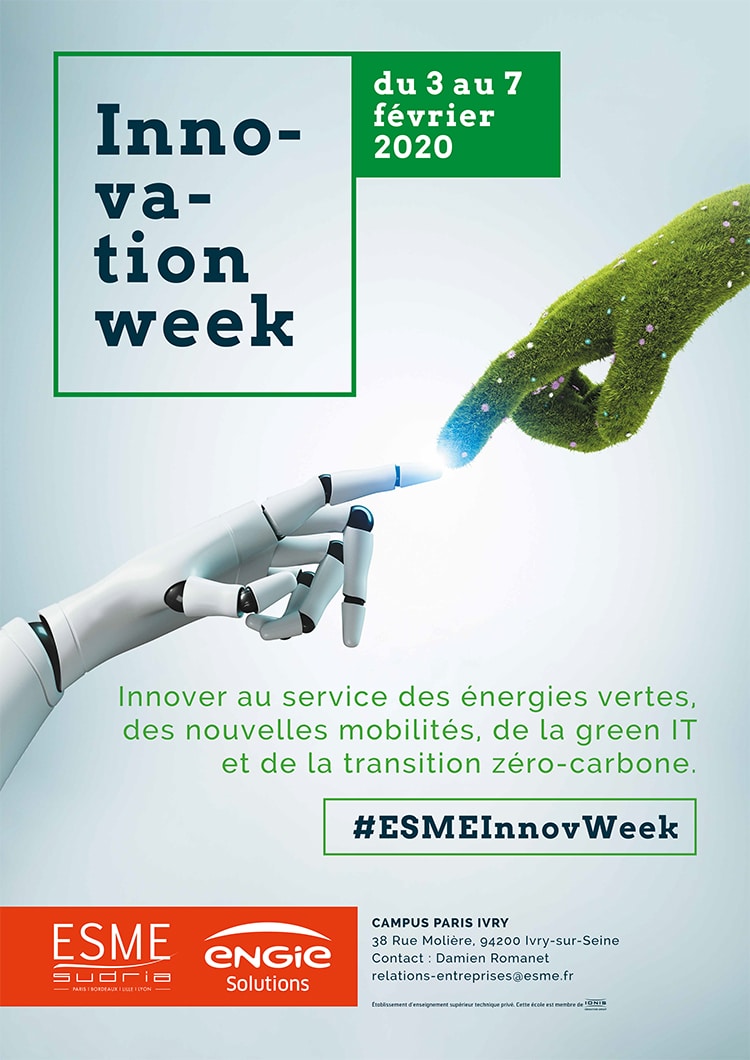